According to austrian state news agency ORF almost 2.000 people have been killed since escalation of PKK, Hüda Par, Turkish Army conflict in eastern Turkey. 800 in duty of turkish security forces were killed, 1200 other people (exact numbers of civilians, PKK or hür dava partisi units is not known)
The author claims, that there were at least 355.000 up to 500.000 persons displaced from the region, almost ethnicity kurds.

According my information sources the struggle between 2 extreme kurdish parties PKK and hür dava partisi began in mid of 2015 and turkish army came later at the end of year 2015 in. Since foreign journalists had almost no access during the conflict to this region, it's very hard to find out, what really happened there.

ORF claims, that a lot of streets in Sur, a central city district of Diyarbakir were razed to the ground. (picture below) I only know, that some of the houses there, were already destroyed (cause of internal kurdish struggle between hür dava partisi & PKK) before the turkish army came in and that the Turkish army also destroyed other houses I don't know, if only the destroyed houses were simply razed by gov later! 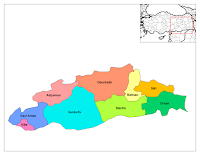